The COVID-19 crisis has continued to put people’s health, jobs, and lives at risk, and thrown the global energy economy into turmoil. We are living through an unmanaged decline in oil and gas, with oil and gas companies continuing to lay off workers, cancel projects, and even abandon polluting infrastructure.

Since the Paris Agreement, many big oil and gas companies have released successive climate strategies, plans, and pledges. More and more, they try to present themselves as part of the solution to the climate crisis.

However, new analysis by Oil Change International supported by 30 other civil society organisations shows that the reality is very different. Not even one of the eight oil majors considered in the analysis even comes close to the minimum baselines for an oil company to have the possibility of being aligned with the Paris Agreement goal to limit warming to 1.5 degrees Celsius (ºC).

This new analysis also includes updated analysis of developed reserves relative to carbon budgets for 2020. The results are stark: 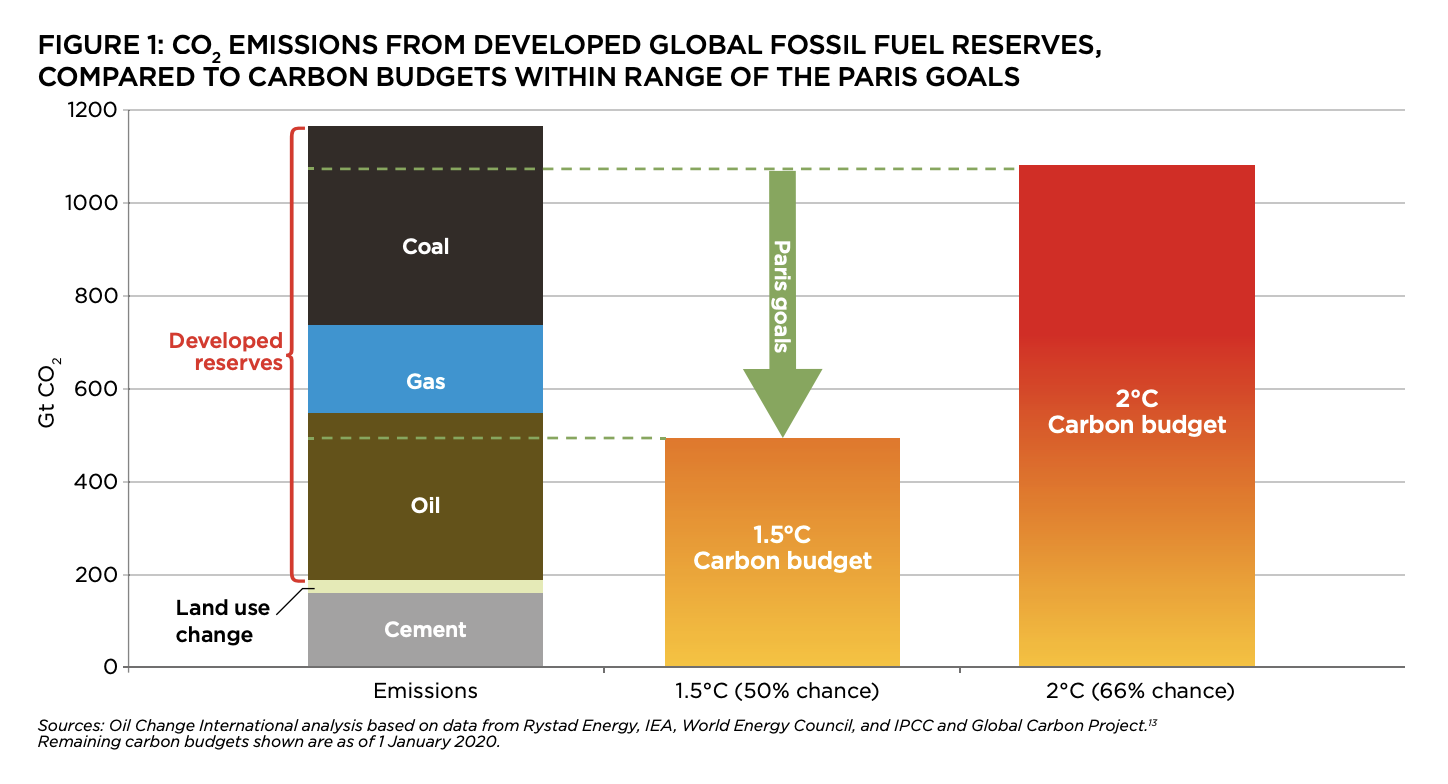 The developed reserves shown are in already-operating projects, meaning the infrastructure has already been built, capital invested, and workers employed.

This means that it will not be enough to just stop new extraction to achieve the ambition of the Paris Agreement. Instead, governments will need to plan to manage the decline in fossil fuel production, closing fields and mines early, and implementing Just Transition strategies to support workers and communities.

COVID-19 recovery: Building back better, or bailing out fossils?

New guidance for finance institutions on aligning with the Paris Agreement
On September 16, a global network of 60 climate and rights groups, led by Rainforest Action Network (RAN), issued the Paris Principles (or, in full, the “Principles for Paris-Aligned Financial Institutions: Climate Impact, Fossil Fuels and Deforestation”), which offer a timely roadmap for the decarbonization of the finance sector to align with the Paris Agreement.

Writing in the Financial Times, Bill McKibben argues that as a result banks, asset managers and insurance companies “can no longer claim to not know what Paris alignment would mean.” It is imperative that these financial institutions implement these principles in their responses to the current crisis.

Denmark: USD 20 billion fund dumps 10 big oil and gas companies
Earlier in September, Denmark’s MP Pension fund announced that it would divest from 644 million kroner (USD 95 million) from ExxonMobil, BP, Chevron, PetroChina, Rosneft, Royal Dutch Shell, Sinopec, Total, Petrobras and Equinor. This was explicitly because of those companies’ failure to live up to the Paris Agreement.

Fossil fuel workers call for a Just Transition
An opinion piece in The Guardian from a fossil fuel sector worker in the UK illustrated the growing movement among workers in the sector for a managed decline and just transition. The worker, who wrote under a pseudonym, states, “Jobs in oil and gas aren’t just at risk from economic shocks and fuel price fluctuation – we’re also in an industry that’s now in terminal decline. The writing is on the wall: fossil fuels are contributing to global heating and sea and air pollution, while green alternatives are cleaner and becoming cheaper to produce.”

Help stop the East African Crude Oil Pipeline (EACOP)
Even now, in the middle of a global pandemic with oil demand in freefall, Total and the Chinese National Offshore Oil Corporation are working to begin a 1,443-kilometer crude oil pipeline through Uganda and Tanzania, EACOP. If built, this would be the world’s longest heated crude oil pipeline, driving peoples and communities from their homes, risking protected biodiversity hotspots, and threatening water sources. Sign and share the 350 Africa petition to to stop banks financing EACOP

In September, Ugandan police also carried out a “preventive arrest” of six environmental activists and three journalists in connection to their opposition to this and other fossil fuel and polluting infrastructure projects. Two remained in custody, though others were released. Civil society organizations have united to demand their immediate release

Centre for Biological Diversity to sue California Governor Gavin Newsom
Last week, the Centre for Biological Diversity wrote to the California Governor to notify him of its intent to file a lawsuit to halt illegal permitting of oil and gas wells in the state. California’s government has issued more than 1,500 permits for new oil and gas wells in 2020. The Centre argues that these permits are illegal as they were issued without a review required by the California Environmental Quality Act.

Unfortunately, that approach is not consistent with a safe climate nor, more specifically, with the Paris Agreement. There is no role for an expansion of the gas industry.

The combustion of natural gas is now the fastest growing source of carbon dioxide to the atmosphere, the most important greenhouse gas driving climate change.

This comes in the context of Australia’s government backing an unscientific, potentially catastrophic “gas led recovery” from the COVID-19 crisis.

However, this announcement still appears to fall well short of the ambition required to limit global warming to 1.5ºC. In particular, by excluding its share of Rosneft from its commitment to decline production, BP is omitting almost 30 percent of the carbon pollution associated with its extraction investments in 2019.

Fossil fuel sector lobbying UK in advance of UN climate meetings next year
UK campaign group Culture Unstained exposed extensive lobbying by big oil and gas companies for a sponsorship role of the 2021 UN climate negotiations to be held in Glasgow next November. As Jess Worth told the Guardian: “Now the disturbing extent of big oil’s backchannel to the government has been revealed, the Cop unit must walk the walk and rule out sponsorship deals with the fossil fuel industry. If we’re going to meet the Paris climate goals, only urgent cuts in fossil fuel production will cut it – and that won’t happen if those determined to keep drilling are sponsoring the summit.”

Texas CCS project “routinely missed its targets” before shut down
A report submitted to the US Department of Energy shows that the Petra Nova plant, a USD one billion project to capture carbon dioxide emissions from a coal power plant, “suffered chronic mechanical problems and routinely missed its targets” before being shut down. This was the only US project attempting to capture carbon from a coal plant.

Fossil fuel financing continues to rise – but there are positive signs
In March, the annual Banking on Climate Change report produced by BankTrack and partners showed that fossil fuel financing from 35 global banks had risen to USD 736 bn in 2019. However, recent analysis by Energy Monitor suggests some reasons for hope: many banks and investors are encouraging companies to develop transition strategies and are investing capital in renewables, and banks in a number of countries have restructured or restricted their financing for the sector.

IEEFA has also released a tracker showing the progress in financial institutions divesting from oil, gas and coal.

BP and Shell still back lobby groups to block climate action
An investigation by Unearthed and HuffPost revealed this week that Shell and BP remain active members of at least eight industry organizations lobbying against climate action in the US and Australia. The companies failed to disclose these memberships in their annual reports.

In Canada, Environmental Defence have launched a campaign demanding that Shell dump the Canadian Association of Petroleum Producers (CAPP).

New report exposes Big Oil’s USD 100 billion bender
A new joint report by BailoutWatch, Friends of the Earth US, and Public Citizen shows that oil and gas companies have issued nearly $100 billion of debt in US markets since the Federal Reserve began its bailout of corporate debt markets in late March. The borrowers include drillers, integrated and independent refiners, pipelines, and oilfield service companies, some of which might not have survived without fresh financing.

Vaca Mueta: Fracking funding in Argentina adds another economic problem
A recent study, Vaca Muerta and Argentine Development (available to read in Spanish, in English and as a graphic overview in English) shows the reality of the Vaca Muerta fracking megaproject. Conducted by economist Gustavo García Zanotti, the report reveals a deficit in the balance of foreign currency in the hydrocarbon sector between 2013 and 2019, with USD 8.6 billion leaving Argentina.

New CarbonTracker report: Billion Dollar Orphans
Released this week, a new CarbonTracker report finds that there are 2.6 million documented unplugged onshore wells in the US, and a further undocumented 1.2 million. Plugging the documented onshore wells alone is estimated to cost USD 280 billion. US states have secured less than 1% of that amount in surety bonds on average, meaning that people face hundreds of billions of dollars in risk.

Stanley Center report: The Four Ds of Oil’s Just Transition
A new Stanley Center report proposes a method for a “fast and fair” Just Transition away from oil and gas to limit warming to 1.5ºC by: dealing with oil companies’ debt; providing for climate risk disclosure; regularizing reduced oil demand after COVID-19, and cooperating for a planned decline in production.