The outcome of the U.S. election — with power shifting from Donald Trump to Joe Biden — will have a major impact on the global climate fight and oil and gas sector, both in the U.S. and worldwide. However, it is still too early to tell what exactly this impact will be, and there are mixed signals.

President-elect Biden’s decision to name John Kerry as special envoy for climate could signal a continuation of Obama-era climate and energy policy, which could limit the potential for supply-side action. In particular, Kerry’s past support for fracking gives cause for worry – but he has also shown a commitment to listening and learning and has the background to hit the ground running. If Biden can be pressured to use the mandate he received from voters to go bold on climate, he could take immediate action to stop the Keystone XL and Dakota Access pipelines, advance environmental justice, and phase out some fossil fuel subsidies, among other key actions.

Notably, new U.S. Vice President-elect Kamala Harris had committed – in her own previous platform as a presidential candidate – to host “the first-ever global negotiation of the cooperative managed decline of fossil fuel production”. She also has a record of confronting oil and gas companies (notwithstanding her problematic history as a prosecutor).

U.S. banks play a big role in funding oil and gas production, and incoming Treasury Secretary Janet Yellen could play a crucial role in changing that – and in making sure that people and communities of color are not left behind. The U.S. Treasury Secretary has legal authority to effectively defund fossil fuels, but how far a Biden administration moves down this path will depend on public pressure.

Finally, many climate campaigners are particularly concerned about fossil fuel influence on potential Biden Cabinet picks. Over seventy organizations signed a letter urging Biden and his transition team to not select Ernie Moniz for any role, in light of his fossil fuel industry ties, and launched a new campaign opposing Moniz and any other fossil fuel-connected figures in a Biden Cabinet and administration.

In the face of this uncertainty, Bill McKibben has written a useful column with recommendations about engaging with the incoming Biden administration.

The International Energy Agency (IEA) released its flagship report, the World Energy Outlook (WEO) 2020 in October. As Bill McKibben argues, this is the most important global report most people have never heard of – and one that has historically incarnated Big Oil and Gas fantasies.

WEO 2020, however, marked a step forward in the IEA’s analysis – after years of civil society campaigning, including from many GGON members. The IEA is now at a crossroads. Where in the past, the IEA has repeatedly underestimated solar growth, it now declares that “solar is king”. What’s more, the IEA has come very, very close to acknowledging the need for no new fossil fuel expansion – if the world is to limit warming to 1.5ºC.

For the first time, the WEO included a ‘case’ or ‘mini’ scenario that could align 1.5ºC, as a stand alone chapter. The new case, called Net Zero Emissions 2050 (NZE2050) achieves CO2 reductions by 2030 that align with a median of 1.5°C pathways assessed by the IPCC – but it only goes to 2030, and its data isn’t included alongside the IEA’s other scenarios throughout the report.

The below graph shows projected oil demand under its two central scenarios, STEPS and SDS, compared to projected supply from existing and new fields. The IEA did not include NZE2050 on this graph, so we at Oil Change International superimposed the IEA’s projection of 2030 oil demand under NZE2050: 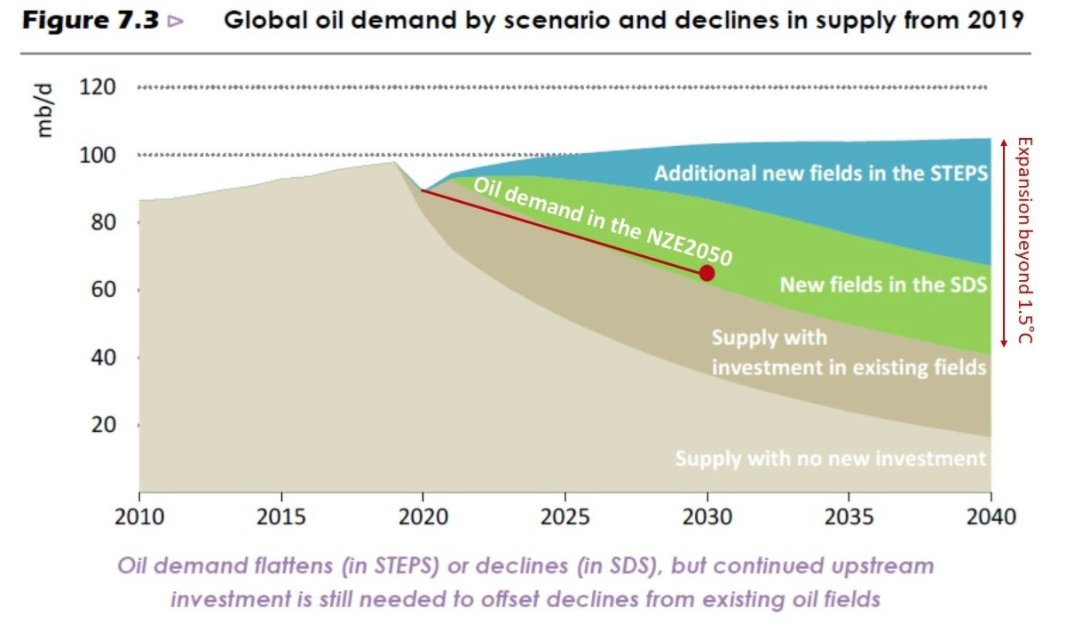 As this shows, virtually all new field investment under STEPS and SDS would be inconsistent with NZE2050 – and so with 1.5ºC. This means that by sidelining NZE2050, the IEA could potentially misdirect trillions of U.S. dollars into new fossil fuel investment. It’s critical that the IEA includes a full, central, 1.5ºC aligned scenario in WEO 2021.

New poll shows that 65% of Britons want state subsidies shifted off fossil fuels
A new poll from YouGov and Global Witness shows that 65% of people in the U.K. want Prime Minister Boris Johnson to shift subsidies from oil and gas to renewable energy. In response, the country’s opposition Labour Party stepped up its demands for an overhaul in tax breaks. The Johnson government is currently reviewing its oil and gas licensing regime.

Permanent oil refinery closures accelerating
As the COVID-19 crisis continues, oil and gas companies are closing down more and more refineries. As we have consistently argued, the oil and gas industry is currently in a chaotic, unmanaged decline. This hurts people and communities, and especially working people, people of color, and frontlines communities. It’s critical that governments step in to manage this decline and implement just transition measures.

Engie renounces US shale gas megaproject
The Engie Group this month told Le Monde that it will not finalize a USD 6.9 bn contract to import liquefied fossil gas into France from the U.S. Sources within Engie described the contract as a reputational risk. The French government, Engie’s largest shareholder, had in September expressed embarrassment about the deal.

Oil giant Total causing human suffering in Uganda
A new Friends of the Earth video and report show how the French oil giant’s plan to build a mega oil project in a national park in Uganda is hurting people now. The company’s plan has led to land confiscations without compensation. Opponents of the scheme have faced threats and intimidation. Friends of the Earth has brought a lawsuit in France.

Day of action against Arctic oil
In October, Gwich’in and Iñupiaq-led Indigenous groups in Alaska called for a day of action against the Trump administration opening the Arctic National Wildlife Refuge for oil exploration. At least 16 banner drops took place across the U.S. In solidarity, activists in the U.K. held socially distanced actions against the British Museum’s partners with BP and fossil fuel funder Citi.

Finance in Common misses opportunity to end fossil fuel finance – but there is a way forward
The Finance in Common Summit was the first global summit of development banks. Both civil society organisations, global south social movements, youth activists and UNSG Antonio Guterres all called for the Summit to stop funding fossil fuels, had but the Summit’s joint declaration disappointed, including no firm, time-bound commitments.

However, the president of the European Investment Bank (EIB), Werner Hoyer, presented a way forward, saying the EIB was “ready to cooperate” with other institutions to end fossil fuel finance.

Call for Fossil Free Zones
In response to the Portuguese government’s September announcement that it was “free of fossil fuel extraction” (after years of peoples’ campaigning), Dr. Fergus Green has proposed the creation of Fossil Free Zones. These would ultimately be geographic areas free from fossil fuel exploration, extraction, transportation, intermediate treatment, and consumption activities. He has also written a paper exploring this further with The Australia Institute.

EU Ombudsman finds that European Commission failed to sufficiently take into account the unsustainability of fossil gas projects
In February, the EU Ombudsman opened an investigation into the climate criteria that the European Commission used to draw up its fourth Projects of Common Interest list, which included high profile fossil gas projects. On November 19, the Ombudsman found that the Commission had failed to conduct adequate climate and sustainability assessments for those projects.

Shell CEO says oil output past peak
In October, Shell raised its dividend to shareholders. Alongside that announcement, Shell CEO Ben van Beurden said that Shell’s oil output “probably peaked in 2019”. The company has announced a further overhaul to meet its announced climate targets (which independent analysis has found are not even close to a baseline for 1.5ºC alignment).

Yet, at the same time Shell continues with more oil and gas projects in Brazil, Brunei, the Gulf of Mexico, Kazakhstan, Malaysia, Nigeria, Oman, the Permian basin, and Britain’s North Sea.

Societe Generale to reduce oil and gas exposure by 10% by 2025 – but more needed
The French multinational investment bank has pledged to cut its oil and gas exposure. However, as Reclaim Finance explains, this is a flawed approach. The bank’s pledge: only applies to loans not equity and bond issues; uses a flawed measure that allows for increased financial flows to fossil fuels; only covers fossil fuel production not transport and processing; and depends on flawed IEA analysis that is inconsistent with 1.5ºC.

Struggling Exxon Mobil tries to silence critics
ExxonMobil has continued to launch bad faith attacks on the researchers, Geoffrey Supran and Naomi Oreskes who in 2017 published peer reviewed analysis on the oil major’s 40 year history of misleading the public about the climate crisis. In response, Supran and Oreskes have published a peer reviewed letter, noting that ExxonMobil’s own arguments (alongside newly leaked documents) in fact show its climate dishonesty is even worse than previously thought.

Also last month, Carbon Tracker published its latest analysis of ExxonMobil, How The Mighty Are Fallen, showing how chasing growth resulted in Exxon dropping out of the S&P 500 top ten stocks and being removed from the Dow Jones Index. Other recent Carbon Tracker analysis found that ExxonMobil was the “worst positioned” super major in a world that aligns oil and gas demand with the Paris Agreement.

This is a step forward, but not in line with what’s needed. The reality is that most of these companies’ carbon pollution is from burning the oil and gas they produce, not fugitive methane emissions. Reducing fossil methane emissions while still maintaining or even increasing fossil fuel production will just lock in climate failure.

Notably, no major U.S. oil and gas company even signed this insufficient agreement.

New investigation: GM, Ford knew about climate crisis before 1970
A new E&E News investigation reveals that two of the U.S.’s biggest carmakers knew that oil, gas, and coal emissions cause climate change as early as the 1960s – despite their decades of political lobbying against emissions standards since.

Notably, in the four months before this announcement, HSBC pushed through five bond and loan deals amounting to USD 1.8 bn in financing for the oil and gas industry.

New report shows low economic impact of reduced oil extraction in Norway
Norway’s statistics agency has published a report finding the reduction in the country’s oil and gas industry would cut less than a thirtieth of the country’s GDP over the next three decades, despite only counting the costs of action to cut production not the climate costs of failing to cut production. This debunks industry scare tactics.

ClientEarth publishes principles for ‘Paris-aligned’ business
Lawyers at ClientEarth have set out a set of eleven principles for assessing business’s climate pledges for the possibility of Paris Agreement alignment. In summary, these plans must be reasonable, transparent, and accountable – and no big oil and gas company would come close to aligning with these principles.

New report on oil and gas fields in Kazakhstan: high cost, low public benefit
A comprehensive new report from Publish What You Pay members finds that two oil and fields in Kazakhstan have delivered few if any economic gains. European and international oil majors have invested in these fields. Local communities say their health has suffered.