We dedicate this edition of OilWire to Ken Saro-Wiwa and the Ogoni Nine. November 10th marked 23 years since Saro-Wiwa and eight other Ogoni activists were executed by the Nigerian government and Shell in retribution for leading peaceful resistance to the environmental destruction of Shell’s oil operations in Ogoniland. The Ogoni resistance forced Shell to withdraw, but in turn led to a brutal backlash from the Nigerian regime at the time.

Internal documents indicate Shell’s complicity in the violence. Last year, widows of four of the Ogoni Nine filed a civil suit against Shell for its role in their hanging. Amnesty International has called for criminal charges to be brought against Shell. As advocates continue to seek justice, the cleanup of Ogoniland – one of the world’s most oil-polluted regions – is just beginning.

Ken Saro-Wiwa and the Ogoni peoples’ fight reminds us of the price so many have paid and continue to pay, in particular Indigenous communities, for defending their land and livelihoods from oil and gas pollution. The oil and gas industry has long been linked to systemic human rights violations, with climate change now emerging as the biggest of them all.

The scenarios database released alongside the Intergovernmental Panel on Climate Change’s (IPCC) Special Report on 1.5°C of Warming provides a way to explore how oil and gas must decline globally to stay on track towards the Paris Agreement goals.

The figure below shows the stark gap between the oil and gas industry’s expansion plans and the pace of decline required to limit warming to 1.5°C, based on the report’s illustrative low-demand pathway that does not rely on new carbon capture technologies. The IPCC report cautions that, “[Carbon-Dioxide Removal] deployed at scale is unproven and reliance on such technology is a major risk in the ability to limit warming to 1.5°C.”

In this 1.5°C trajectory, exploring for and developing new oil and gas reserves is incompatible with the rate of oil and gas decline required. In fact, some existing extraction projects would need to be phased out early. 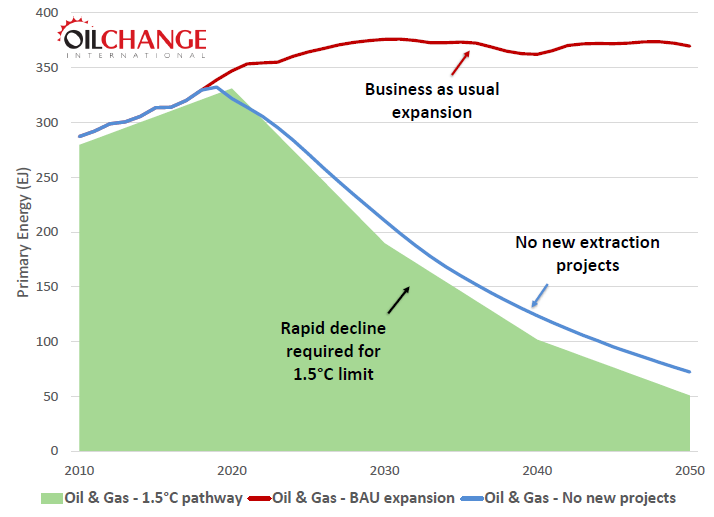 Spain’s draft climate plan would ban new drilling, phase out fossil fuel subsidies
A draft climate plan put forward by Spain’s new government could set a new bar for action within Europe by combining strong demand- and supply-side measures. According to news reports, the plan would halt new licenses for oil and gas drilling, ban fracking, phase out fossil fuel subsidies, divest government finances from fossil fuels, and direct funding towards a just transition for workers, while scaling up to 100 percent renewable electricity by 2050. Some within parliament and civil society are pushing for the plan to go further and include rapid decarbonization goals. The proposal was announced a month after the Spanish government reached a €250 million just transition deal with unions that paves the way for closing most of the country’s coal mines by the end of this year. (The Guardian, Climate Home News, The Guardian)

U.S. court blocks Keystone XL pipeline over climate review
A U.S. federal court has blocked construction of the Keystone XL pipeline again – giving renewed momentum to Indigenous communities and climate activists that have successfully fought the tar sands project for ten years. The judge ruled that the Trump administration violated U.S. environmental law by providing no justification for its decision to revive the pipeline, which the Obama administration had rejected. The Trump administration “simply discarded prior factual findings related to climate change to support its course reversal,” the judge wrote. View the legal decision here. (InsideClimate News)

New Zealand ban on new offshore oil and gas exploration passes into law
New Zealand’s parliament officially approved a ban on new licenses for offshore oil and gas drilling in early November. The law fulfills a pledge made by Prime Minister Jacinda Ardern in April of this year. According to Kate Simcock at Greenpeace in New Zealand, “This law means that around four million square kilometres of the earth’s surface is now off limits to oil and gas companies, and any deposits under our deep seas will stay in the ground where they belong.” (Australian Associated Press)

Galp and Eni abandon drilling off Portugal’s Algarve coast
Mayors and citizens along Portugal’s Algarve coast are celebrating after a Galp-Eni consortium revealed that it is abandoning plans for exploratory offshore oil drilling. In August, in response to a legal challenge from the citizens’ group Algarve Free of Petroleum Platform (PALP), a court put an injunction on Galp and Eni’s plans. The mayor of Aljezur, the city closest to the proposed offshore drilling, said he wants to change drilling regulations in Portugal “so that the threat will not be repeated in the future.” (The Portugal News)

IEA’s World Energy Outlook comes up short on climate (again)
The International Energy Agency’s (IEA) flagship annual report, the World Energy Outlook (WEO), once again steers governments and investors towards dangerous levels of climate change, as detailed in this analysis from Oil Change International’s Research Director Greg Muttitt. The WEO’s “climate” scenario does not reflect the level of ambition required to meet the Paris Agreement goals. Ignoring the dire warnings of the IPCC’s special report on 1.5°C, the WEO does not mention the 1.5°C warming limit. It also calls for more investment in oil, gas, and coal, contradicting IEA president Fatih Birol’s own comment that, “We have no room to build anything that emits CO2 emissions.” (EnergyPost)

Why targeting fossil fuels motivates climate activism
New analysis from political scientist Fergus Green at the London School of Economics considers why “the present wave of anti-fossil fuel politics … resonates better with ordinary people” compared to more technocratic approaches prioritized over the past three decades. Fossil fuels and associated infrastructure are readily understood problems that are associated with a range of other tangible harms. Targeting this industry concentrates moral pressure on the actors most responsible for driving the climate crisis. (The Conversation)

The oil and gas industry’s ‘capex conundrum’
This update from the Institute for Energy Economics and Financial Analysis (IEEFA) looks at the “quandary” oil and gas companies currently face in deciding whether to invest in new drilling or “signal that they’re a shrinking industry” by returning cash to investors. According to IEEFA, “The combined pressures of weakening prices, rising competition, and a negative investment outlook have diminished the status of fossil fuel investments in the stock market.” (IEEFA)

Indigenous resistance halts TransCanada work on two Mexican gas pipelines
Indigenous peoples in southeastern Mexico have been fighting to protect their land from TransCanada as the company seeks to complete two pipelines through the region. Just this week, TransCanada announced that it is halting work on both the Tuxpan-Tula and Tula-Villa de Reyes projects due to “social and legal uncertainty” that “makes the continuity of our investments impossible.” Refusing to give up their land, local communities formed an Indigenous-led council, which filed a legal complaint over the government’s inadequate review of the Tuxpan-Tula project. Argus reports that the two pipelines have now been delayed for a combined 56 months. (Houston Chronicle, Deutsche Welle, Argus)

Ecuador scales back oil auction
Resistance from Indigenous peoples also led to Ecuador’s recent announcement that it will scale back an oil auction planned for the end of 2018 from 16 blocks to two. The titled territories of seven Indigenous nationalities overlap with the blocks originally proposed for auction, which covered nearly seven million acres of roadless, primary forest in the southeastern Ecuadorian Amazon. Indigenous communities announced their immediate opposition to the plan when it was first proposed earlier this year. In late October, Ecuador’s Hydrocarbon Minister Carlos Pérez cited “conflict with communities” as the reason for scaling back the auction. (Amazon Watch, link I and link II)

Argentine groups say UN report backs up their call to end fracking
A coalition of community and labor groups, human rights advocates, environmental organisations, and university faculty have endorsed the findings of a recent United Nations report that calls on the Argentine government to reconsider its push for oil and gas development in Vaca Muerta. On top of the climate, local environmental, and Indigenous rights’ impacts of the fracking project, it is proving dangerous for workers. The death toll of workers killed in accidents on the Vaca Muerta shale reserve in 2018 has reached five, with the total accident count much higher. (Observatorio Petrolero Sur, link I and link II)

UK capacity subsidies to coal and gas plants ruled illegal by European court
A European court has ruled that the UK government must halt a scheme in which it pays subsidies to gas and coal power plant operators to provide backup power, ruling that the payments amount to illegal state aid. The ruling is a blow to fossil fuel generators that are increasingly relying on subsidies to compete with renewable alternatives. (The Guardian)

Groups highlight flaws in Canada’s restarted Trans Mountain review
Canada’s National Energy Board (NEB) has restarted its review process for the controversial Trans Mountain tar sands pipeline expansion, in the wake of an appeals court ruling that quashed the government’s previous approval of the project. In late October, Indigenous leaders, environmentalists, and members of parliament held a press conference in Vancouver to outline how the new review process is repeating the flaws that led to the court’s ruling: rushing consultation with First Nations and limiting its review of marine impacts. They vowed to bring new legal challenges to the federal review and to continue resisting the project. (The Star)

Big Oil pours money into U.S. elections to clobber climate measures
Oil companies spent enormous sums of money to defeat climate and clean energy measures on the ballot in the recent U.S. elections. As summed up in Vox, such spending “puts the lie to the notion that oil and gas companies plan to be productive partners in the climate fight.” For example:

However, positive trends emerged as well. Thirty-five members of the incoming U.S. House of Representatives have pledged to reject all campaign contributions from oil, gas, and coal companies, part of a wave of over 1,200 local, state, and federal candidates who signed the No Fossil Fuel Money Pledge. Many of the same legislators are now pushing for a bold “Green New Deal” to decarbonize the U.S. economy. (The New York Times, Vox, Oil Change US)

Lundin Petroleum execs could face war crime charges over Sudan
Executives with the Swedish-based company Lundin Petroleum could soon face war crimes charges over their company’s actions in southern Sudan. The company’s entry into oil exploration and development in 1997 made the area known as Block 5A “a focal point of the civil war.” Reports link Lundin’s operations to the killings and forced displacement of thousands of civilians. (Bloomberg)

New Briefing: UK aid budget benefits oil and gas projects
Platform has released a new analysis showing that over GBP £2 million of the UK’s Official Development Aid budget from 2016 to 2018 has gone towards promoting shale gas drilling in China, as well as oil and gas expansion in Brazil, Mexico, India, and Myanmar. View the briefing.

Fossil Fuels on Trial: Tracking the status of climate lawsuits against oil and gas companies
InsideClimate News provides a summary and timeline of the major lawsuits filed in the United States over the oil and gas industry’s and the government’s roles in driving climate change. Read more.