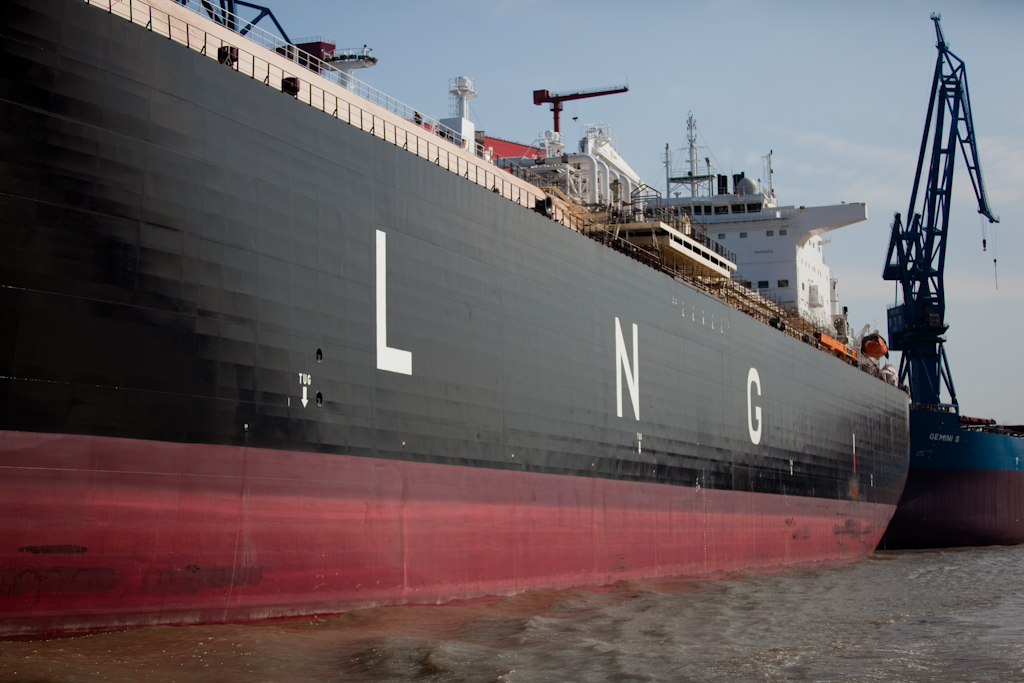 Global Energy Monitor released a new report this month that unpacks the results of its survey of proposed liquefied natural gas (LNG) terminals around the world. As CNN summed it up, the results show a massive LNG buildout on a “collision course” with global climate goals.

The report finds that, measured by global warming impact, “the scale of the LNG expansion under development is as large or greater than the expansion of coal-fired power plants.”

The United States and Canada lead the world in proposed LNG export capacity additions, accounting for almost 75 percent, followed by Russia. But this buildout could impact communities on nearly every continent, with export projects proposed or under construction in Mozambique, Tanzania, Iran, Indonesia, Papua New Guinea, Australia, and elsewhere. In total, proposed LNG projects would divert USD 1.3 trillion into more fossil fuels and away from clean alternatives.

But only eight percent of the proposed capacity is already under construction. This means governments and public and private financial institutions still have a choice: Will they help lock in a new wave of expensive fossil fuel infrastructure, even with competitive or cheaper solar and wind alternatives? Or, will they take the 1.5-degree warming limit seriously, and put a stop to it?

P.S. The Global Fossil Infrastructure Tracker, the basis for the LNG report mentioned here, maps existing and proposed LNG terminals, oil and gas pipelines, and coal terminals around the world. Explore the tracker to learn more.

The International Energy Agency (IEA) released a new report on gas and its “role in energy transitions” last week. In a nutshell, the IEA’s own “role of gas” report shows little to no role for gas in any ambitious emissions reduction plan. While that’s not the headline the IEA used, that’s what its data essentially show:

South African court halts fracking plans in the Karoo
Following years of campaigning to stop fracking in the Karoo region of South Africa, two civil rights and environmental groups won their case at the Supreme Court of Appeal this month. The court determined that regulations for oil exploration and production, including shale gas, first promulgated in 2015 were not valid and threw them out, putting a halt to drilling plans. As a result of continuous pressure from the groups, AfriForum and Treasure the Karoo Action Group, Shell had already scaled back its fracking plans in the region.

Calif. governor fires top oil regulator: ‘I want to start seeing a transition’
California’s new governor, Gavin Newsom, has taken steps to break with the oil-friendly legacy of his predecessor Jerry Brown. His first budget included money to study “strategies to decrease demand and supply of fossil fuels.” This month he fired the head of the state’s oil and gas regulating agency after news broke that the pace of fracking permits had doubled in 2019, and that officials held investments in oil companies drilling in the state. Newsom emphasized, “I want to start seeing a transition” away from oil and gas extraction. The 500-group Last Chance Alliance is calling on the governor to back up these words with bold action: to halt all new drilling permits and phase out existing wells within 2,500 feet of homes and schools, steps he has the authority to take.

Time for a Fossil Fuel Non-Proliferation Treaty?
In Climate Policy, Peter Newell and Andrew Simms make the case for a Fossil Fuel Non-Proliferation Treaty as a mechanism to “effectively and fairly leave large swathes of remaining fossil fuels in the ground,” a need not directly addressed by the Paris Agreement. They describe the form it could take, key challenges, and current opportunities to advance it as part of a new wave of climate policies that tackle emissions at the source.

Why Canada must stop oil expansion – forecasts of rising demand be damned
In the Financial Post, Keith Stewart of Greenpeace Canada rebuts two common myths used to justify new oil development in Canada: that oil sands are being “singled out” by campaigners and that “ever-rising” oil demand is a given. Industry backers who dismiss the idea of oil being left in the ground “should be asked to explain why the Bank of Canada just added climate change to its list of main [financial system] vulnerabilities,” Stewart writes.

Waorani win upheld in Ecuador
Cementing a historic legal victory first won in April, Indigenous peoples in Ecuador successfully defended a court ruling this month that protects half a million acres of their territory in the Amazon rainforest from being earmarked for oil drilling. The decision permanently voids the fast-tracked consultation process between the Waorani people of Pastaza and the Ecuadorian government in 2012. It establishes a legal precedent for Indigenous Ecuadorians to challenge the potential future auctioning of 16 oil blocks that cover over seven million acres of Indigenous territory.

First Nations, environmental groups file new legal challenges to Trans Mountain pipeline
While the Trudeau government approved the Trans Mountain pipeline expansion project (TMX) for a second time in June, six First Nations have officially petitioned the Federal Court of Appeal to challenge it once again. They argue that the federal government did not respond to previous consultation concerns and that the government’s CAD 4.5 billion purchase of the pipeline created a conflict of interest. Chief Leah George-Wilson of Tsleil-Waututh Nation was clear: “Canada had already made up their mind as the owners of the project. We have no choice but to appeal again, and we expect the same result: that the approval will be overturned.” Two conservation groups have also filed a legal motion over the government’s continued failure to account for risks to endangered southern resident orcas.

Portuguese residents occupy proposed gas drilling site in Bajouca
In the Bajouca region of Portugal, 400 local residents and activists marched last weekend to the proposed drilling site of an Australian-based oil and gas company to say “no” to fossil gas and demand climate justice. The “Camp-in-Gás” protest, organized by a coalition of community and climate groups, occupied the site to send a message to Australis and the Portuguese government: they intend to resist any step towards extraction in the region.

Despite ‘climate emergency,’ UK opens new oil and gas licensing round
Despite declaring a climate emergency in May, and committing to net-zero greenhouse gas emissions by 2050 in June, the UK’s Oil and Gas Authority opened its 32nd licensing round this month. The UK is auctioning off 768 new blocks or part-blocks for exploratory oil and gas drilling. Recent analysis has shown that the UK’s 5.7 billion barrels of oil and gas in existing fields is more than the UK can extract in line with the Paris climate goals. The new licensing round puts the UK further out of step with its climate commitments.

Papua New Guinea tells Exxon and Total: ‘Pay your fair share of tax’
ExxonMobil’s USD 19 billion LNG export project in Papua New Guinea has brought new problems but little benefit to residents. The backlash to these unfavorable terms could now delay a USD 13 billion plan by Exxon, Total, and Oil Search Ltd. to double LNG exports from the country. The country’s new prime minister has pledged to assert more local control over the country’s resources, telling an oil industry gathering this month that, “[W]e will be asking you to pay your fair share of tax.”

Guyana to hold new elections amidst oil upheaval
The Caribbean Court of Justice upheld a no-confidence vote in the Guyanese government last month, triggering new elections just as Exxon ramps up oil development in the country. The political upheaval was spurred on by “overly generous contract terms” granted to Exxon as the company rushed to develop offshore oil discoveries. Exxon expects to produce the first oil from its Liza Phase I project in early 2020, with the first production vessel en route from Singapore now. A new government could seek to overhaul future contract terms with oil companies.

Canadian government subsidizes massive Shell-led LNG project
The Canadian government is providing CAD 275 million for a massive LNG project in Kitimat, British Columbia. The CAD 40 billion project, announced by Shell and partners last year, is set to be the largest private sector investment in Canadian history. The new subsidy came just a week after the federal government declared a climate emergency. It adds to an array of provincial tax subsidies created for the mega-project, such as no sales tax, subsidized electricity, reduced corporate income tax, and shielding from increases in the carbon tax rate.

World’s top oil producers suppress science in UN process
During the latest round of UN climate talks, Saudi Arabia, with support from the United States, Iran, and Australia, effectively blocked further discussion of the latest science on 1.5-degrees of global warming within the formal negotiations. Last December, the United States, Russia, and Saudi Arabia teamed up to reject the findings of the Intergovernmental Panel on Climate Change’s 1.5-degree report. The link to fossil fuel interests was not lost on Lois Young, lead negotiator for the Alliance of Small Island States. “I witnessed envoys from countries with major oil, gas and coal interests – many who have shown no interest in planning for a low carbon future – saying that they reject that science,” wrote Young.

BP admits some oil resources will stay in the ground
In an interview with Bloomberg, BP’s head of strategy admitted some of its oil and gas “won’t see the light of day,” pointing to the most expensive and longest time-horizon projects as likely candidates. This admission comes in the context of increasing investor pressure over climate change. BP has said it will report to shareholders this year on “how each new capital investment decision is in line with the Paris climate accord,” even as analysis shows that no new fossil fuel investment meets that standard.

GE to raze a decade-old gas plant because wind and solar are cheaper
General Electric (GE) is shutting down a California gas plant 20 years early amid stiff competition from cheaper wind and solar electricity prices. The closure, expected by the end of 2019, is part of a downward trend in GE’s gas turbine business. The California plant will be sold to a company that creates battery storage, which is increasingly being developed to serve energy demand peaks.

U.S. executives ordered to trial in Colombia’s biggest-ever corruption scandal
At least USD 2 billion dollars went missing in Colombia during the upgrading of the country’s state-run oil refinery – the biggest corruption scandal in the country’s history. This month, a judge separately ordered the extradition and imprisonment of two former executives with U.S. engineering firm CB&I (now part of McDermott International). They allegedly teamed up with executives of state-owned Ecopetrol to inflate contract costs and take kickbacks that were spent on “exotic excesses.”

Report: Fossil fuel subsidies in Argentina / Los subsidios a los combustibles fósiles en Argentina, 2018-2019
Fundación Ambiente y Recursos Naturales (FARN) released a new report last month on fossil fuel subsidies in Argentina. While subsidies are on a trend downward due to International Monetary Fund conditions, fossil fuels still accounted for 97 percent of all Argentine energy subsidies in 2018, or 6.5 percent of the national budget. The USD 340 million given to oil and gas production companies could have funded the annual salary of 35,000 early education teachers. Download the report here in Spanish or English.

Now available in Spanish: El mito del gas como ‘combustible puente’
The Heinrich Böell Foundation released a Spanish translation of the summary of Burning the Gas ‘Bridge Fuel’ Myth, a report from Oil Change International that shows why climate goals require phasing out gas. Read the summary in Spanish, or download the full report in English.

See what you missed: IEEFA 2019 Energy and Finance Training
If you couldn’t make it to the Institute for Energy Economics and Financial Analysis (IEEFA) training last month, you can still explore many of the presentations online.

Who are Canada’s Fossil-Power Top 50?
This new resource from Corporate Mapping Project profiles the top 50 “emitters,” “enablers,” and “legitimators” in and around Canada’s fossil fuel industry.