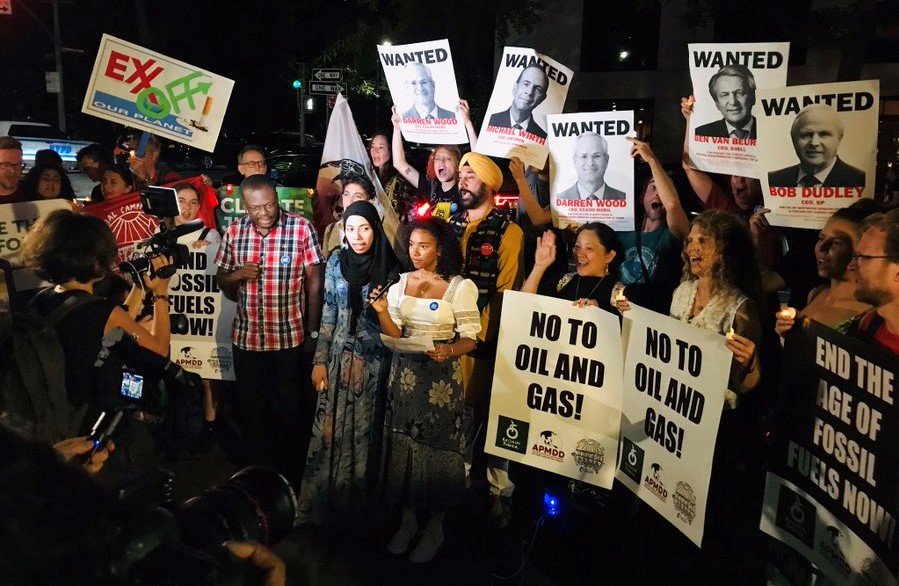 From the United States to Kenya to Australia, one of the fundamental demands of the four million youth and elders who joined the global #ClimateStrike last Friday was to keep oil, gas, and coal in the ground.

This month, OilWire tracks some momentum in that direction: The global divestment movement now counts USD 11 trillion worth of assets going fossil free. Pressure is growing in Denmark to cease new oil and gas licenses. A bill to do just that has been introduced in Iceland. The world’s largest multilateral lender, the European Investment Bank, has a plan to eliminate fossil fuels from its portfolio, while more than 530 civil society groups worldwide have signed the Lofoten Declaration, calling on wealthy nations to lead in a managed phase-out of fossil fuel production.

Yet we also saw resistance to the calls of youth strikers from predictable quarters this week in New York. In the words of The Economist, “nowhere was the gap between stated intention and present reality more apparent than in a gathering that afternoon of oil and gas companies across town.” Protesters greeted the Big Oil CEOs with chants of “keep the carbon in the soil.” Inside the room, the CEOs greeted this challenge with silence: “Which of your companies will be the first to acknowledge that we need to stop expanding the oil and gas industry?”

A report released this month by the Carbon Tracker Initiative finds that the oil and gas industry has recently sanctioned USD 50 billion worth of new extraction projects that undermine the Paris Agreement goals on economics alone.

The figure below, taken from the same report, reminds us why this expansion must stop: The oil and gas in projects that have already been sanctioned will take the world past 1.5°C, assuming carbon capture and storage remains sub-scale. Source: Breaking the Habit – Why none of the large oil companies are “Paris-aligned,” and what they need to do to get there, Carbon Tracker Initiative, September 2019.

Worldwide divestment movement surpasses USD 11 trillion
As the Financing the Future summit kicked off in Cape Town this month, the volume of assets going fossil free surpassed USD 11 trillion, with more than 1,100 institutional investors pledging to divest. That represents an estimated 16 percent of global equity markets and an increase of 22,000 percent since 2014.

New divestment commitments came before and after the summit …

Iceland could move next to ban new oil and gas licenses
Iceland has a chance to become the next country to show leadership in ending oil and gas expansion. A bill was officially introduced in Parliament this month that would prevent the government from issuing any new exploration licenses unless the concentration of carbon dioxide in the atmosphere falls below 350 parts per million for 12 consecutive months.

The oxygen on which the fire of global warming burns
In his latest New Yorker feature, Bill McKibben suggests that “the key to disrupting the flow of carbon into the atmosphere may lie in disrupting the flow of money to coal and oil and gas.” Going beyond divestment from fossil fuel companies themselves, it’s time to scale up pressure on the banks, asset managers, and insurers that fund their business model.

U.S. finance and lobbying fuels fracking in Vaca Muerta
A new briefing from Platform outlines the role played by the U.S. government in promoting the expansion of fracking in Argentina, from providing public finance loans to counseling Argentinian businesses and local officials on how to promote and regulate the industry. This month, over objections from members of Congress, the Trump administration deepened that support. The U.S. Overseas Private Investment Corporation approved USD 450 million in loans to facilitate the drilling of 110 new fracking wells and related pipeline infrastructure. The briefing is available in English and Spanish.

How big is the fossil fuel ‘production gap’?
Cleo Verkuijl of the Stockholm Environment Institute previews a forthcoming report on the world’s fossil fuel “production gap,” and outlines steps governments can take to close it. “[If] nothing changes, countries will be on track to produce 50% more fossil fuels by 2030 than can be used in a 2°C world,” writes Verkuijl. The full report is forthcoming in November 2019.

Denmark’s new government faces key climate leadership test
The new Danish government – elected this summer on promises of bold climate action – must soon decide whether to approve new oil and gas exploration licenses in the North Sea. A new report from Oil Change International and Greenpeace Denmark shows that expansion of North Sea oil and gas would be incompatible with Denmark’s climate commitments. This week, two parties within the ruling government’s coalition declared their support for ending oil and gas licensing.

Argentina takes step to militarize Vaca Muerta fracking mega-project
As Argentina approaches a contested national election, President Mauricio Macri’s administration released a resolution that paves the way to military control of oil assets in the Vaca Muerta region by designating it a “strategic objective of the National State.” The move is being contested by local government officials, the Indigenous Mapuche community, and opposition parties. The step further aligns the Argentine government with the tactics of the Trump administration, which just sent military troops to help guard Saudi Aramco’s oil assets.

Greenpeace rapellers charged under new Texas anti-protest law
Ahead of a U.S. presidential primary debate, 31 activists with Greenpeace rappelled from a bridge over the Houston ship channel – partially blocking the busiest oil export hub in the United States. They are now the first activists to be charged under Texas’s “critical infrastructure” law, which makes interfering with fossil fuel projects a felony punishable with up to two years in prison. The case could test the constitutionality of the law, which mirrors anti-protest laws passed in at least eight other U.S. states.

‘Cape Town Declaration’ raises the bar for Big Oil shareholder engagement
During the Financing the Future summit in South Africa, faith, human rights and climate groups issued a challenge to the coalition of shareholders engaging with Big Oil companies on climate. The “Cape Town Declaration” calls on Climate Action 100+ stakeholders to divest from any company that fails to commit by December 2020 to “a rapid phase-out of fossil fuel production, including no exploration for new reserves and no expansion of refining and pipeline capacity.”

Irish Prime Minister commits to end new oil exploration? Not so fast
Earlier this week in New York, Irish Prime Minister Leo Varadkar said he would accept the advice of his Climate Change Advisory Council and ban new oil exploration in certain Irish waters. But his government will keep backing more gas extraction and leave recently granted licenses in place. Meanwhile, the government has been blocking legislation that would fully ban new oil and gas licenses. Grassroots groups and opposition MPs vow they will keep fighting for a complete licensing ban and against the lock-in of more polluting gas.

China uses oil as a bargaining chip for control over South China Sea
President Xi Jinping reportedly offered Philippines President Rodrigo Duterte a majority stake in a joint oil and gas exploration venture in Filipino waters – if the Philippines were to ignore an international arbitration ruling against China’s territorial claims in the area.

Opioid ruling could advance liability claims against Big Oil
A court ruling from the U.S. state of Oklahoma could set a helpful precedent for climate lawsuits against oil companies. The court held pharmaceutical company Johnson & Johnson liable for millions in compensation under public nuisance law for supplying narcotics it knew to be harmful. Significantly, Johnson & Johnson was an intermediary in the opioid supply chain – the same role oil companies play in selling harmful fossil fuel products to utilities and gas stations.

Mexican president signs deal to put cross-border gas pipelines into service
Mexican President Andrés Manuel López Obrador struck a deal last month to clear the way for five idle or incomplete pipelines to start carrying fossil gas across the border from Texas. The controversial delayed projects, led by separate U.S., Canadian, and Mexican companies, are a priority for drillers in the Permian and Eagle Ford Basins in Texas, where companies are struggling to find markets for record levels of gas production.

Signs of the beginning of the end of Big Oil?
CNBC asked this week: “Are we beginning to see signs of the end of Big Oil as an investment stalwart?” The energy sector recently hit its lowest weighting in the S&P 500 in four decades and ExxonMobil dropped out of the index’s top ten for the first time in ninety years. While these trends are due in part to the relative rise of the tech sector, analysts observe that oil companies are losing “growth investors” questioning the long-term future of the industry.

Exxon touts another oil find in Guyana, while political stand-off continues
Guyana’s government remains mired in a political crisis fueled in part by unfair oil contracts, as the sitting president stalls a court-mandated election. Meanwhile, ExxonMobil continues to invest in Guyana as a prime site for production growth. Last week, the company announced its 14th oil discovery off the country’s coast.

Exxon’s increasing interests in Guyana and in U.S. shale fields coincide with the company’s recent move to sell its Norwegian offshore assets and, potentially, those in the UK North Sea.

Webinar recording + slides: The Permian Basin – a global climate emergency
If you missed last week’s webinar with experts on the rapid expansion of extraction in the U.S. Permian Basin, you can catch up by downloading the recording.

New study links fracking to massive rise in global methane emissions
A new peer-reviewed study by Robert Howarth at Cornell University concludes that shale-gas production in North America, facilitated by fracking, may be responsible for more than half of all of the increased methane emissions from fossil fuels globally over the last decade.

Crashing the Climate: How the car industry drives the climate crisis
A new report from Greenpeace East Asia and Greenpeace Germany examines the climate impacts of the world’s 12 largest car manufacturers. The report calls on carmakers to end new sales of diesel and petrol cars, including hybrids, by 2028 to align with a 1.5°C warming limit.