As 2019 drew to a close, the Philippine Commission on Human Rights announced a landmark conclusion: that the 47 investor-owned “carbon majors” can be held legally liable for human rights violations stemming from climate destruction.

As 2020 kicks off, oil majors are responding to their eroding social licence with a “high tide of greenwashing,” as AFP recently put it. The American Petroleum Institute launched a seven-figure ad campaign to confirm, “We’re On It.” Amazon is helping BP go “greener” by switching its servers to the cloud. Even the Texas Oil and Gas Association, pushing full speed ahead on the world’s largest oil expansion project, claims it is “absolutely committed to climate progress.” The CEO of the Climate Leadership Council recently penned an op-ed insisting that oil and gas companies understand the scale of the challenge and “want to be part of the solution.” We’re essential “partners” in the energy transition, the narrative goes.

But the oil industry had its chance to be a “partner” in tackling the climate crisis – starting in the 1950s – when it first knew that extracting and burning ever more fossil fuels would put human society at risk. They blew that chance. Just in time for the latest wave of greenwash, Season 3 of the award-winning Drilled podcast examines the “Mad Men” of climate denial – starting with the oil industry publicist-turned Nazi adviser who created the Big Oil propaganda playbook still in use today.

Big tobacco companies are not invited into the room to write health policy. Yet, the oil industry is still trying to claim it deserves a role shaping responses to the climate emergency.

Dr. Simon Evans of Carbon Brief created a striking new visual that cuts through the oil and gas industry’s claims of being a “partner” in the energy transition. (Even the UNFCCC shared it.)

The data come from the International Energy Agency’s (IEA) new report on “The Oil and Gas Industry in Energy Transitions.” Somewhat contrary to its title, the report’s data show that oil and gas companies continue investing against a clean energy transition, directing 99.2% of their capital expenditure towards fossil fuels in 2019. 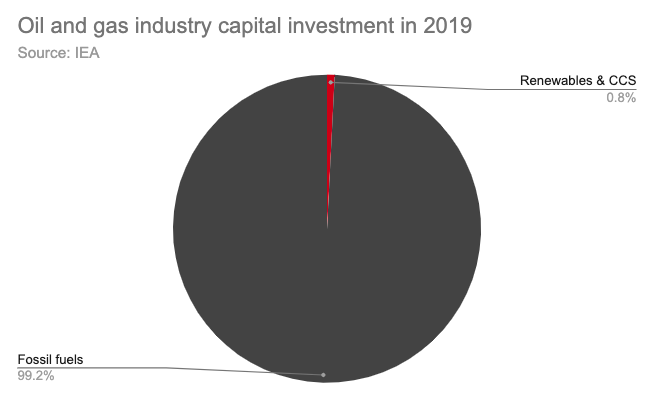 New campaign pushes Wall Street to ‘Stop the Money Pipeline’ …
A coalition of climate, Indigenous, youth, and environmental justice groups launched a new campaign to shut off the Wall Street “money pipeline” on which the fossil fuel industry relies to finance climate destruction. JPMorgan Chase, BlackRock, and Liberty Mutual are the campaign’s top initial targets. Indigenous leaders Tara Houska and Eriel Deranger along with activists, including Jane Fonda and Bill McKibben, kicked off the effort by helping to shut down a Chase Bank branch in Washington, D.C.

… and BlackRock responds to the pressure
The CEO of BlackRock, the world’s largest asset owner, outlined a new set of climate policies in his annual letter to clients, responding to the growing pressure from civil society campaigns to urgently phase out fossil fuel investments. An in-depth take on the details of the letter can be found here. While the company’s commitments are far from adequate, the move signals that Wall Street is feeling the heat.

A ‘radioactive secret’ exposed: U.S. oil and gas waste
A Rolling Stone investigation shines new light on a long-running scandal in the U.S. oil and gas industry. It produces nearly a trillion gallons of wastewater annually, often laced with radioactive substances. Workers are being exposed to radiation without their knowledge, leading in some cases to lethal cancers. Yet there is still virtually no oversight of how this waste is handled or its health effects. Closing regulatory loopholes could put the industry out of business.

Study: EU risks wasting billions in public funds on ‘unnecessary’ gas projects
A new study from Artelys warns that 32 gas infrastructure projects that the European Parliament just approved as “projects of common interest” are nearly all “unnecessary from a security of supply point of view, and represent a potential overinvestment of tens of billions of euros, supported by European public funds.” Read the full report.

IEA scenarios may not stand the test of climate litigation – Shell should pay attention
Big Oil is using IEA scenarios, which all exceed 1.5°C, to defend itself in court against climate lawsuits. This new blog post from Laurie van der Burg, senior campaigner at Oil Change International, explains why a Dutch Supreme Court ruling signals that this industry tactic is on thin ice.

Climate strikers tell Davos: Immediately cease fossil fuel investments
Ahead of the World Economic Forum, Greta Thunberg and 20 other youth climate leaders made clear what a baseline of climate ambition would look like: stopping the expansion of the fossil fuel industry and the money that enables it. They called on world leaders convening in Davos to “immediately halt all investments in fossil fuel exploration and extraction, immediately end all fossil fuel subsidies, and immediately and completely divest from fossil fuels.” Failing to do so “would be a betrayal of life itself.”

Irish campaigners call on candidates to stop new oil and fracked gas
As Ireland sprints towards a snap election, activists are coming together to set a new bar for climate leadership among elected officials. Both the “One Future” campaign and the “Fossil Free Election Pledge” call for a ban on all new licenses for oil and gas exploration, as well as an end to fracked gas imports to Ireland. After blocking a full exploration ban, the current ruling party announced last fall that it was willing to ban oil exploration, but not gas.

Luanda Leaks: Oil corruption at the center of Angola’s stolen fortune
A trove of documents uncovered by the Platform to Protect Whistleblowers in Africa indicates that “preferential deals and lucrative transactions,” many of them centered around state-owned oil company Sonangol, robbed the Angolan people of more than USD 2 billion. Find more details in this reporting led by the International Consortium of Investigative Journalists.

U.S. LNG export plants pollute on par with coal; further setback for Jordan Cove
Data compiled by Bloomberg show that 18 fossil gas export terminals already approved in the United States could emit as much carbon dioxide annually as 24 coal plants. Six of the 18 approved projects are already operating, while four are under construction. Separately, campaigners in Oregon are celebrating new momentum against Pembina’s widely opposed Jordan Cove LNG export project, which has yet to receive state approval.

Norway digs in on drilling, awards 69 new exploration blocks
During COP25, Greta Thunberg and 15 other youth climate activists sent letters of warning to both Norway and Canada, saying they are violating children’s rights by continuing to expand oil and gas production. This month, Norway doubled down on worsening the climate crisis, awarding 28 companies 69 new blocks for offshore oil and gas exploration.

Nigerian minister recognizes need to plan for oil decline
Last month in Madrid, Nigeria’s Environment Minister Mohammad Mahmood Abubakar said the Paris Agreement means that oil producing nations like Nigeria must plan for a future without the industry. “These days, anything to do with fossil fuel … may have its days numbered, or years numbered,” said Abubakar. But Nigeria’s ability to transition will depend on financial support due from wealthy nations.

Yet the UK is dealing oil and gas – not clean energy – to Africa
The UK government has pledged to “support African countries in their transition to cleaner energy.” Yet, The Guardian reports that more than 90 percent of the GBP 2 billion in energy deals struck at last week’s UK-Africa investment summit were for fossil fuels. A separate investigation released last week shows UK Export Finance has helped to finance overseas oil and gas projects that will emit 69 million tonnes of carbon-dioxide pollution per year.

Meanwhile, UK-headquartered Tullow Oil had to suspend its oil operations in Kenya this month due to the effects of the climate crisis, as heavy rains caused flooding and damaged roads in the previously drought-stricken Turkana region.

Canada’s Trans Mountain Pipeline deal could bleed billions in taxpayer dollars
An independent analysis by economist Robyn Allan finds that the Canadian government’s purchase of the Trans Mountain tar sands pipeline project “has probably cost taxpayers CAD 8 billion in subsidies to oil and gas companies through unjustifiably low pipeline tolls.” Despite promising the deal would make money, the government’s own filings show the pipeline lost CAD 75 million in the first nine months of 2019.

Renewables beat oil and gas index in 2019 U.S. stock results
The Institute for Energy Economics and Financial Analysis (IEEFA) reports that the energy sector was the worst performer in the Standard & Poor’s 500 index (S&P 500) in 2019, despite a 30 percent rise in oil prices. Further analysis by S&P Global shows “a sharp contrast between renewable and fossil fuel investments.” An index of renewable energy companies that S&P Global tracks outperformed oil and gas production companies, as well as the S&P 500 on the whole.

Japanese government joins LNG export project in the Russian Arctic
Japan, one of the world’s largest sources of public finance for coal, is now expanding its investments in LNG exports. A Japanese consortium that includes the country’s Ministry of Economy, Trade and Industry signed on last month to a USD 9.1 billion LNG export project in the far-eastern Russian Arctic, the third Russian LNG project with Japanese support.

Shell tax controversy exposes UK subsidies regime
A new report from Shell shows the company paid zero UK income tax in 2018, despite making USD 730 million in profit from UK operations. Instead, Shell received refunds from taxpayers worth nearly USD 115 million. This is in large part due to taxpayers footing up to half the bill for decommissioning North Sea oil platforms, leading to vastly reduced or no tax contributions from companies. This is “a feature that is now baked into the UK oil and gas tax system,” according to Stuart McWilliam of Global Witness.

Mexican state oil company announces new discovery
Pemex, Mexico’s state-owned oil company, announced last month that it had made its largest discovery in 30 years, a deposit in southeastern Mexico that it says could yield 500 million barrels of crude. Mexican President Andrés Manuel López Obrador has made it a priority to increase Pemex’s production, despite pledging new drilling safeguards during his campaign.

Study: Oil and gas buildout in the U.S. Permian could equal pollution of 131 coal plants
A new peer-reviewed study finds that the buildout of oil and gas infrastructure in the U.S. Permian Basin could lock in as much greenhouse gas pollution as 131 coal plants by 2030. More than half of the emissions would spew from petrochemical facilities (38%) and LNG export terminals (19%) being built downstream of extraction operations, largely in Texas and Louisiana. Read the full study (open access) in Environmental Research Letters.