The Intergovernmental Panel on Climate Change (IPCC)’s latest report provides a compelling scientific case for winding down the fossil fuel industry as quickly as possible. Limiting global warming to 1.5 degrees Celsius (°C), the more ambitious aim of the Paris Agreement, could save the lives of several hundred million people. Achieving this will require “deep emissions reductions in all sectors,” including a near-term cut of 45 percent by 2030. Even with the report’s estimates of larger carbon budgets, there is no room for expansion of the fossil fuel industry.

How are oil and gas companies reacting? Two big ones – Exxon and Shell – have deflected attention away from solutions that would force significant declines in oil and gas production. Exxon contributed USD 1 million to an oil industry-linked group advocating for a modest U.S. carbon tax. The group’s proposal includes ending climate liability lawsuits against oil companies in the U.S. Shell’s CEO suggested planting a forest the size of Brazil.

At the same time, grassroots pressure is forcing governments and companies to respond. Shell will have to defend its lack of ambition in court next year in the Netherlands, where a ruling last week affirmed that the government’s insufficient action on climate violates human rights. Canadian producers are having to sell their crude at a record price discount due in part to First Nation-led movements to stop export pipelines. Goldman Sachs recently warned Big Oil that the fossil fuel divestment movement is “gathering pace” and companies need to diversify.

By providing the clearest picture yet of the urgency of phasing out fossil fuels, the IPCC report also provides a new tool for holding institutions at all levels accountable to commensurate action.

In 2016, Oil Change International found that existing fossil fuel extraction projects globally contain enough oil, gas, and coal to push the world beyond the Paris Agreement’s temperature limits. This finding was based on carbon budgets in the last major IPCC report from 2014.

How do somewhat larger carbon budget estimates in the IPCC’s latest report compare? The figure below provides an initial look. (Note: There is an active scientific debate over evolving methodologies, and the larger budgets do not yet reflect a clear scientific consensus.)

The key takeaway is this: There is still no room for new fossil fuel development. Staying within the 1.5°C limit (or “well below” 2°C) will require government action to manage the decline of fossil fuel production. Read the full analysis here. 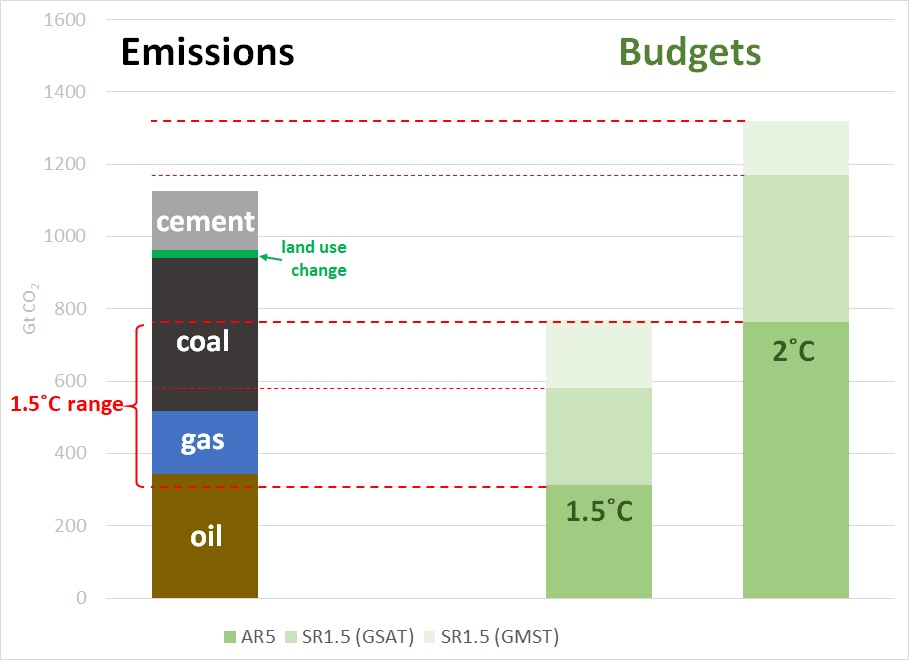 Dutch Court Upholds Strong Climate Verdict. Precedent for Shell?
The day after the release of the IPCC report, a Dutch Appeals Court upheld a landmark 2015 climate ruling. The appeals court went further than the initial ruling, finding that the Dutch government has a “legal duty to ensure the protection of the life and family life of citizens” from climate change. In addition to forcing the Dutch government to achieve faster cuts in emissions by 2020 to protect human rights, the decision creates momentum for other climate liability lawsuits pending worldwide, including those against oil companies.

A Dutch court is also going to hear arguments in a lawsuit that Friends of the Earth Netherlands/Milieudefensie is bringing against Shell. That suit seeks to compel Shell to reduce its fossil fuel production activities in order to align its business model with the Paris Agreement. Of particular interest for the Shell case, the court ruling in Urgenda Foundation v. The State of Netherlands dismisses climate scenarios that rely on future negative emissions technologies – a tactic used by Shell (and other oil and gas companies) – as “highly uncertain” and not a reasonable basis for delaying emissions cuts in the near term. Read the full court ruling (in English) here. (The Guardian, Climate Liability News)

Learn more about the climate case against Shell and add your support here.

Permian Oil Production and Pollution Surge After Lifting of U.S. Export Ban
A group of U.S. journalists is producing a series of investigative reports on the causes and impacts of the unprecedented drilling “frenzy” occurring in the Permian Basin, which stretches across the U.S. states of Texas and New Mexico. Enabled by the lifting of the U.S. crude oil export ban under the Obama administration, and driven by fracking, Permian oil production has doubled in just four years – and is poised to double again by 2023. Production growth in the Permian is responsible for making the United States the world’s largest oil producer. As the report describes it, rising production and exports is “bringing big profits to oil companies as well as lung-searing pollution … while threatening to exacerbate climate change.” Read Part I and Part II in the series. (Center for Public Integrity)

Oxford Conference Focuses Attention on Supply-Side Climate Policy
Roughly 100 researchers, scientists, advocates, and activists came together last month at Oxford’s Queens College to share insights into the value of and obstacles to supply-side responses to the climate crisis. Sessions tackled issues such as equitably managing declines in extraction, the limits on fossil fuel production required by climate goals, and subsidies and other finance that enable the fossil fuel industry. The need to tackle the political influence of the oil and gas industry, and the related effects of carbon lock-in, were recurring themes. You can watch each session from the two-day event here. (Stockholm Environment Institute)

Fracking Re-Starts in the UK; Court Frees Protesters
The UK firm Cuadrilla began fracking exploration wells in Lancashire on Monday, marking the first fracking in the UK since the practice was halted in 2011. Local residents and climate advocates continued their peaceful resistance, blocking traffic near the drilling site entrance and charging the UK government with climate hypocrisy for launching a new fossil fuel industry” while asking “how it can reduce carbon emissions to zero.” Protesters got a morale boost on Wednesday when three men recently jailed for blocking access to Cuadrilla’s fracking site last year were freed by a court of appeals. The court quashed their year-plus sentences as “manifestly excessive.” The judge who first ordered the sentences has family ties to the oil and gas industry. (Blackpool Gazette, The Guardian)

New Call for Banks to Phase Out All Fossil Fuel Lending
BankTrack, with the support of 120 civil society organisations from 34 countries, launched a global call this week for major banks to end their financing of the fossil fuel sector, recognizing that “stopping climate breakdown requires bringing the fossil fuel industry to a just and managed decline.” The groups are urging banks to immediately end their support for all new coal, oil, and gas projects, and to publish robust phase-out plans for existing fossil fuel clients ahead of next year’s United Nations climate summit. The demands echo the Declaration on Climate Finance signed last year by 80 of the world’s leading economists, who called on both public and private investors to “lead in putting an end to fossil fuel development.” Learn more about the “Fossil Banks, No Thanks” campaign. (BankTrack)

Negligence Fuels Deadly Oil Pipeline Explosion in Nigeria
The explosion of an oil pipeline in the state of Abia in southeast Nigeria last Friday has killed more than 50 people – with one report putting the death toll at 200. On Monday, 2,000 youths from the area carried a coffin to the local depot of the Nigerian National Petroleum Corporation (NNPC), protesting the company’s negligence with signs such as, “NNPC wants to kill us all,” and, “The explosion was not as a result of vandalism.” News reports indicate that NNPC and the Abia state government originally blamed the fire on vandalism, but Nigeria’s National Emergency Management Agency has confirmed that lack of proper maintenance led to the pipeline rupture. Local residents say pipeline operators were pumping fuel through a line that had been abandoned for several years. (The Sun I, The Sun II, Vanguard)

UN Commission Warns Argentina over Large-Scale Fracking in Vaca Muerta
In releasing its recommendations to Argentina this week, the United Nations’ Council on Economic, Social, and Cultural Rights (CESCR) expressed concerns over the potential climate, local environmental, and Indigenous rights impacts of large-scale fracking in the Vaca Muerta region. The commission urged the Argentine government to “reconsider the large-scale exploitation of non-conventional fossil fuels” [translation] in order to ensure its compliance with both the International Covenant on Economic, Social, and Cultural Rights and the Paris Agreement. The recommendations also call for proper consultation with affected communities in the region, and raise concern over austerity and structural adjustment policies that are closely tied to exploitation of Vaca Muerta. (CESCR, in Spanish, Center for International Environmental Law)

Canadian Crude Sinks to Record Low vs. U.S. Benchmark Price
The price discount of Canada’s benchmark crude to the U.S. benchmark widened to USD 50 per barrel last week – the largest price differential on record. Bitumen from the tar sands is likely fetching negative prices, given the benchmark crude price reflects a blend. A lack of export pipeline capacity, as well as key refinery outages, are driving the steep discount. These price dynamics demonstrate the link between proposed new export pipelines like Keystone XL, Line 3, Energy East, and Trans Mountain, and prospects for tar sands expansion. Without massive new export infrastructure, investment in new tar sands projects is unlikely to take place. Indigenous-led organizing to block new pipelines is playing a clear role in keeping tar sands in the ground. (The Globe and Mail I, CBC, The Canadian Press)

In Response to IPCC, Shell Deflects Focus from Fossil Fuels
Rather than consider cutbacks to Shell’s planned oil and gas production, Shell CEO Ben van Beurden pointed towards “massive reforestation” as an answer to the IPCC’s latest climate report. As he addressed the Oil and Money conference in London, van Beurden suggested that “another Brazil in terms of rainforest” could be a solution for increasing climate ambition while asserting, “Shell’s core business is, and will be for the foreseeable future, very much in oil and gas.” (The Guardian)

Exxon Seeks to Escape Climate Liability with Carbon Tax Donation
The day following the release of the latest IPCC report, Exxon announced it will donate USD 1 million over two years to a U.S. carbon tax advocacy group. The group’s proposal would end climate liability lawsuits, as well as federal regulation of climate pollutants, in exchange for a modest carbon tax, starting far below what studies indicate would meaningfully reduce emissions. Such a plan would protect Exxon and other oil majors from potentially paying billions in damages for climate harm. Geoffrey Supran, an academic expert on Exxon’s climate PR tactics, calls this Exxon’s “Trojan Horse.” (Climate Liability News) 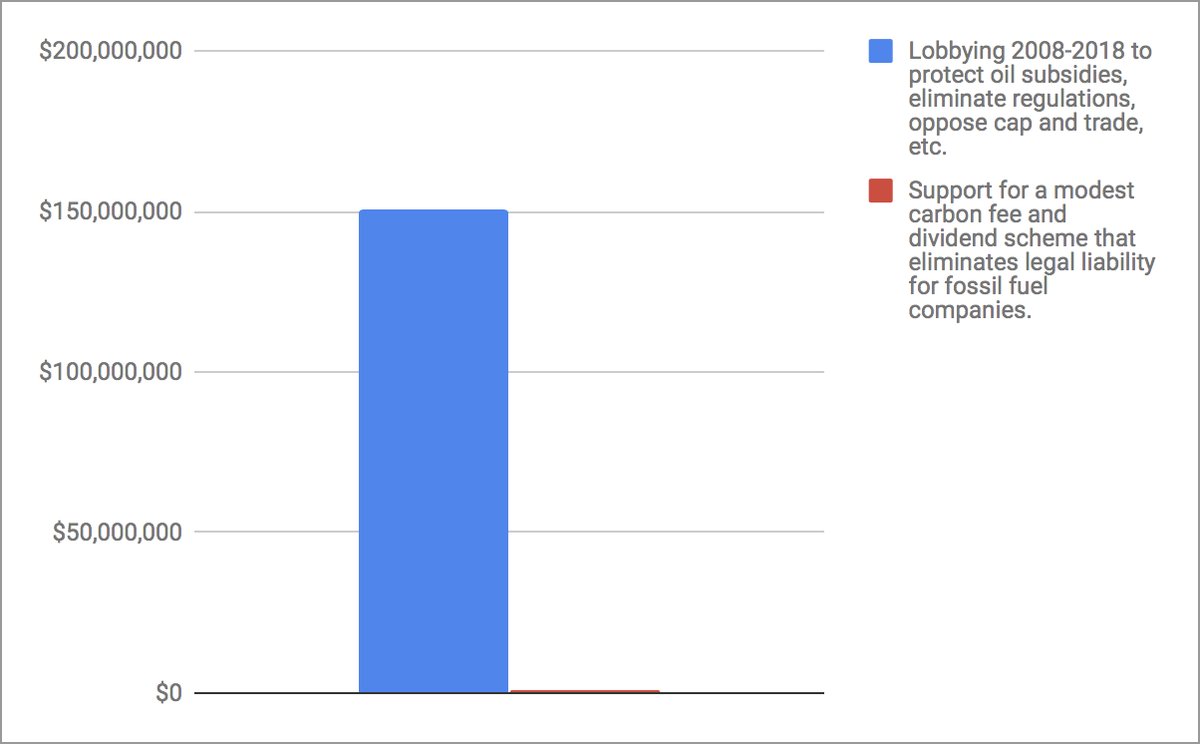 Goldman Sachs Says Big Oil Must ‘Re-imagine their Business’
Goldman Sachs analysts are calling on oil companies to diversify and “lay out a strategy towards becoming Big Energy,” as reported by Bloomberg. The analysts’ report, issued to Goldman clients the same day as the IPCC report, cites the “gathering pace” of the fossil fuel divestment movement as an example of pressure building on the industry to change course. The analysts put a positive financial spin on their recommendations, predicting the industry would see higher returns on drilling projects while scaling them back, due to higher prices. (Bloomberg)